Gale Force Winds: What Are They And How Are They Formed?

If we were to talk about the strongest forces on the earth currently, some people might say nuclear power or fossil fuels, but in terms of the strongest natural forces, not much beats the weather.

We can see the effect of these winds in our everyday lives, from the gusts that blow in from the ocean to the multiple warnings we receive from the news and meteorology stations.

However, there is more to winds than many people know about. For example, what exactly is a gale force wind? Is it important? And how are they formed in the first place?

In this article, we seek to answer the questions on gale force winds and help you to understand them better.

WHAT IS A GALE FORCE WIND?

When we speak of gale force winds or just gales, we are talking about quite a specific wind.

Wind is around us most of the time, which you can see from the rustle of leaves or feel it on your skin. This is because by its very nature, it is in constant motion around the planet in what are known as cycles, like the Hadley Cycle.

However, a gale is a particularly strong and persistent wind that has a minimum speed of around 31 mph or 50 km/h and a maximum speed of 63 mph or 102 km/h.

This may not seem that strong, but to put this into perspective, the minimum speed of a gale is about the normal driving speed of a car or a couple of mph above the maximum running speed of Usain Bolt.

Therefore, the wind is very quick and as it is carrying a lot of moving air particles, these winds can be powerful.

The strongest gales are generally felt more keenly and more often on coastal regions or on island nations. Places like the United States Eastern Seaboard, Ireland, or the Philippines are good examples of places that often feel the effects of powerful winds.

The original name for gale is cited to come from multiple sources, but they all stem from the early Germanic languages.

The original meanings for old words that inspired the modern gale are different, but very similar in that they mean ‘to sing’, ‘to charm’, or ‘to scream’. This shows how enchanting and destructive gales have always been to us.

Since the wind speeds between gales and the power they can exude can vary, the appearance or detection of a gale often comes with a warning from weather forecasters that is given to the public.

Although gales are not known to injure people too often, it has happened in the past.

THE CLASSIFICATIONS OF GALES

Different speeds of gale have different classifications, due to the varying effects that these winds can have upon the area they are in.

The environment, the cycle, the turn of the earth, and even human interaction with the wind can change what kind of wind it is. As such, a classification system has been created to determine each kind of wind and how we should view it.

This is called the Beaufort Scale or the Beaufort Wind Force Scale, and it is an empirical measure that relates the wind’s speed to observed conditions on either land or sea.

There have been many revisions to this scale since its inception by Francis Beaufort, but the modern scale posits that there are 13 classifications that relate to wind.

0 is the lowest, and it indicates that the air is in complete calm, while 12 is the highest, and it dictates that the wind is at hurricane force. Gales sit between the numbers 7 and 10, with four classifications of gale force wind.

8 is a fresh gale or just a gale and this is when the wind is between 39 and 46 mph (62 to 74 km/h), at this point twigs and small branches are breaking off trees, and it is incredibly difficult to walk in.

9 is a strong or severe gale and this is when the wind is between 47 and 54 mph (75 to 88 km/h), at this point slight structural damage to buildings will be occurring – slats from roofs falling off or chimney pots being knocked down.

Finally, we have the whole gale or the storm and this is when the wind is between 55 and 63 mph (89 to 102 km/h), at this point trees are uprooted and there is significant structural damage to buildings.

Beyond this point, gales will become major or violent storms and eventually hurricanes. In our breakdown of the description of gales, we have only provided the land descriptions, as most people will not experience a gale at sea.

However, if you do wish to know about gale classifications at sea, then look up the Beaufort Scale for yourself, and it will give you a run down.

WHAT ARE THE CAUSES OF GALE FORCE WINDS?

Although wind may seem pretty random or chaotic in nature in general, there are consistent causes for it. Wind is produced when air flows from a high pressure system to a low pressure one.

The atmosphere of the planet exerts pressure on our weather systems at points, which leads to pressure systems on the air around us.

The flow of air is created by these two systems and so its power is dictated by the stability of them, with an unstable weather system exuding more power in a localized area.

For example, hurricanes happen in certain areas of the globe far more frequently, because high pressure and low pressure systems are in constant flux.

In these areas, the warmed ocean in the summer months will heat the air and cause it to rise, but the atmosphere will be very cool and so the air will cool down quickly and descend. This creates a cycle of rapidly heating and cooling air that keeps moving air moving quickly and creates a vortex that forms a hurricane.

There are many examples of this in the modern world, with some of the best being in the most unlikely of places. For example, Ireland is a very windy country and the northern county of Donegal experiences some intense winds.

The pressure changes between the land and northern Atlantic, as well as the series of large hills and mountains that create tunnels, mean that it has a constant wind bellowing through the county.

Another good example is Cape Town in South Africa. Considering that the rest of South Africa experiences significantly less wind than Cape Town, this seems like a highly unusual place to have gale force winds. However, it is a town that regularly experiences winds up to 75 mph.

This is, once again, due to the differences between land and ocean, with the ocean being cooler than the land, and the fact that a mountain range sits close to the town.

As such, Cape Town is notorious for having powerful gusts of wind that seem random in origin and blow visitors off of their feet.

Gale force winds are an incredible phenomenon in the world today, and they are a perfect example of our earth’s weather systems. They are winds that travel between 31 mph (50 km/h) and 63 mph (102 km/h) as a strong and persistent gust over a continued period of time.

Gale force winds occur when air from a high pressure system flows into a low pressure one. Although gales can be dangerous, they are moderate compared to more powerful storms. 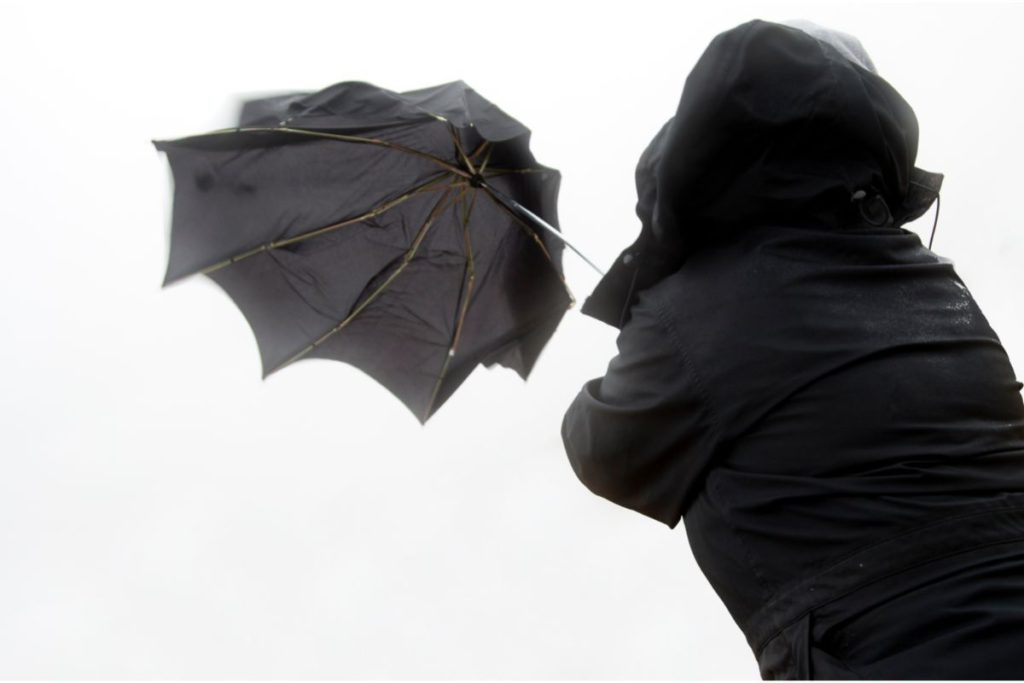