How Do You Spot A Cumulonimbus Cloud?

To the average observer, clouds can look totally ordinary and totally unremarkable whenever they show up in the sky overhead.

But there are actually an incredible number of unique and distinct types of clouds that show up all across the sky. But how do you identify certain clouds?

This can sometimes be a little more tricky. Want to find out how to identify the unique Cumulonimbus cloud when it shows up in the sky?

Then make sure to read on down below, because we are going to find out what makes these clouds distinct, and how you can spot them with ease!

WHAT IS THE CUMULONIMBUS CLOUD?

Put very simply, the Cumulonimbus cloud is a distinctly dark cloud that is known for being highly vertical and producing high volumes of precipitation.

You will most commonly spot Cumulonimbus clouds when the weather takes a turn for the worst and becomes incredibly stormy.

Thanks to their high volumes of precipitation, Cumulonimbus clouds are known for causing heavy rain, hail, thunder, and even lightning, alongside plenty of strong winds.

HOW DO YOU SPOT A CUMULONIMBUS CLOUD?

They are incredibly impressive, and their bases can often be seen hanging quite low to the ground, with the tops often extending massively into the sky.

Cumulonimbus clouds can also end up growing to be so tall that they take on a very unique shape.

If the top of a Cumulonimbus cloud reaches high enough to touch the troposphere, then the contents of the top of the cloud will spread outwards.

This can give the clouds what is described as an ‘Anchor’ shape.

You will also notice a Cumulonimbus cloud from afar thanks to its dark gray appearance, which comes as a result of its high volume of precipitation just waiting to rain down!

It is also very common that, when you spot a cumulonimbus cloud it will begin to rain down shortly.

They can also lead to wall clouds, which occur when the outer edges of a cloud shelf are pulled down to create a surrounding wall.

This can occasionally lead to tornadoes, though this is not always the case.

WHAT IS THE TROPOSPHERE?

Cumulonimbus clouds are noted for their tallest points often reaching the Troposphere, with the lowest points reaching remarkably close to the ground, giving them a tall and imposing look.

Cumulonimbus clouds are also unique in comparison to other cloud types in that they extend across multiple layers of cloud levels, from the very lowest, to the very highest!

If you notice any tall clouds rolling in across the horizon, then it is likely that some heavy rain and wind are in store.

HOW DO YOU TELL A CUMULONIMBUS CLOUD APART FROM A NIMBOSTRATUS CLOUD?

When you find yourself directly under the path of a Cumulonimbus cloud, it can often be difficult to tell if it actually is that specific type of cloud, or whether it may actually be a similarly tall cloud: the Nimbostratus cloud.

If a cumulonimbus cloud is overhead, it likely will cause some changes in the weather, including higher winds, heavy rainfall, hail, or even lightning storms.

A Nimbostratus cloud, on the other hand, is more likely to only cause rainfall.

If you find yourself experiencing numerous weather events under a tall cloud, it is most likely a Cumulonimbus cloud.

WHERE DOES THE TERM ‘CUMULONIMBUS’ ORIGINATE FROM?

At this point, you may be finding yourself wondering how exactly the Cumulonimbus cloud got its long-winded name. The name is actually derived from Latin.

The term ‘Cumulo’ refers to a large heap and a large congregation, while ‘Nimbo’ refers to rain.

Thus, together, the two Latin words combine to create a collective term that refers to a large collection of rain.

This makes it an appropriate name, as the Cumulonimbus cloud is known for its high volume of precipitation.

Cumulonimbus clouds are most recognizable for the tall shapes that allow them to reach very close to the ground while still also reaching the Troposphere.

They are also commonly associated with heavy rain, hailstorms, lightning, and strong winds.

You can also expect a strong likelihood of thunderstorms to accompany Cumulonimbus clouds. 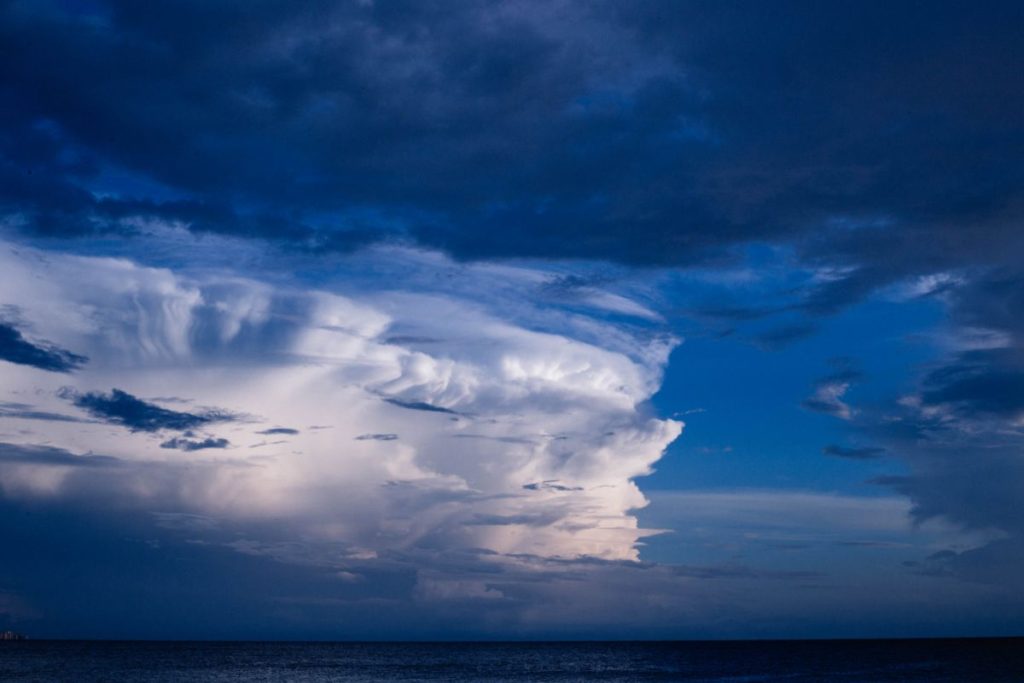