If you’ve looked at the clouds, you will have noticed that cirrus clouds have a distinctive shape compared to the others.

Cirrus clouds are thin and wispy and remain at a high altitude. But what are these clouds, and how are they formed?

In this article, we’ll explore what these clouds are and everything else you need to know about them.

WHAT IS A CIRRUS CLOUD?

Cirrus clouds don’t look like your average clouds, as they’re made up of ice crystals. They remain at a high altitude, moving with a thin, wispy shape.

These white clouds are commonly found everywhere. However, not all of them are quite so fibrous as they can merge and tangle together.

They’re also a type of cloud that humans can make.

While this is only based on a technicality, the condensation trails from aircraft can turn into cirrus clouds due to the jet exhaust in cold temperatures.

WHERE CAN YOU FIND A CIRRUS CLOUD?

Cirrus clouds aren’t a sign of rain, as there is no potential for precipitation due to their thin shapes.

So, you can often find these white clouds in sunny weather, and because of that, they’re commonly found worldwide.

So, wherever you are in the world, if you look up at the sky when the sun is out, you’ll find that these cirrus clouds are the most common.

WHAT ARE THE DIFFERENT SPECIES OF CIRRUS CLOUD?

There are five species of cirrus cloud, all of which have distinct shapes.

However, you will find that while some of these species will appear amongst other clouds, the cirrus spissatus and the cirrus uncinus are unique to cirrus clouds.

The cirrus castellanus is an uncommon cloud that appears at a high altitude with wispy streaks. They give the appearance of rising towers, with turrets emerging.

Cirrus fibratus is almost hairlike, and only appears at a high altitude. They’re one of the most common variants of cirrus cloud.

The cirrus floccus looks like a puff of wool. They aren’t uncommon at all.

What differentiates them from other floccus clouds is the ragged tufts emerging from the puff of wool.

These are the densest variant of cirrus clouds. The cirrus spissatus is packed together tightly.

You won’t find a spissatus in any other cloud type, and it’s clearly recognized. Spissatus clouds tend to form from dying thunderstorms.

The cirrus uncinus is another variant you won’t find in any other cloud type. Cirrus uncinus has a thin, curved appearance and was named for its hook-like shape.

You can often find them close to other cirrus clouds, which are often a sign of incoming bad weather.

While there are five species, there are also four varieties of cirrus clouds.

These often show how the clouds appear in the sky. Here is a list of what they are and how they appear.

Cirrus duplicatus is a multi-layered cloud type that is common among five cloud types.

You can identify them by finding them where similar cloud types are all at various altitudes. These are often found at a high altitude with thin, wispy streaks.

Cirrus intortus is unique from duplicatus as the cirrus clouds are intertwined.

These are a special variety that is only found among cirrus clouds and can only be found in high altitudes. They are sometimes described as looking like a spiderweb.

The cirrus radiatus cloud is found among five cloud types and appears in high, thin streaks. You can often find them by fibratus clouds.

Cirrus vertebratus is only found among cirrus clouds and has a unique appearance.

They appear in fibratus clouds and may occur from aircraft contrails. They are distinct in that they look like fish skeletons.

There are two distinct supplementary features of cirrus clouds: fluctus and mamma. The cirrus fluctus appears to have curls and a Kelvin-Helmholtz wave formation.

Meanwhile, the cirrus mamma can often be found near a thunderstorm. They appear with high, wispy streaks and look like cow’s udders.

While cirrus clouds don’t have any accessory clouds, they have two more associated clouds: homogenitus and homomutatus clouds.

The homomutatus is a variant that mutated from the homogenitus but appears to have a more natural appearance.

Cirrus clouds are distinct due to their thin wispy appearance, and their appearance only in high altitudes.

They are easy to find and can often be confused with cirrocumulus clouds and cirrostratus clouds. However, you can identify cirrus clouds by their thin appearance. 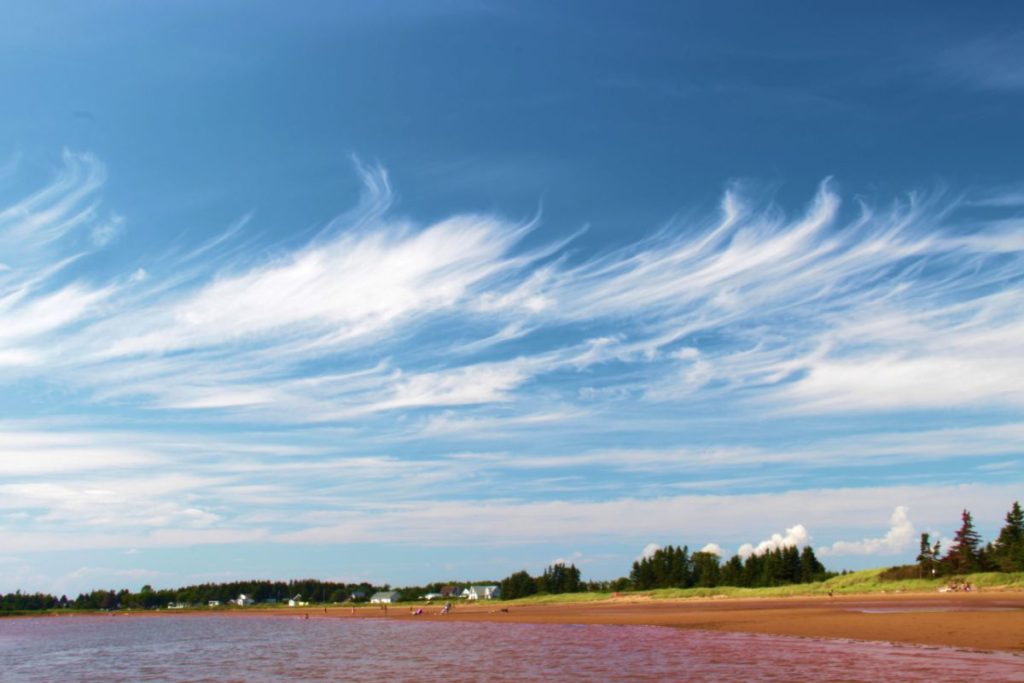